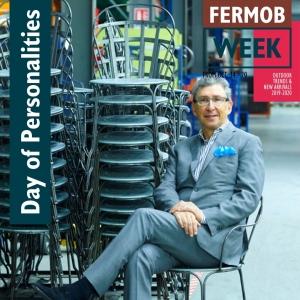 When Bernard bought the French furniture factory Fermob in 1989, it was small company in the heart of France, employing only a dozen people still mainly working as blacksmiths and artisans.

But Bernard had big ideas, having worked as a product manager and marketing director at Black and Decker. He immediately announced that the business was a global company, startling his small staff, who thought he was crazy!

His goal when looking for a business opportunity was to have a consumer product that was easily exportable, made with real expertise and craftsmanship. Completely by chance he happened on a metal workshop in Thoissey at the border of the Burgundy and Beaujolais area of France. His strategy was to diversify the range, focussing on creativity and modernity, while not forgetting its artisanal roots. Bernard set up an in-house design team, and an R&D office and quality testing facilities. Before too long the colour range went from just green and white to today’s annual palette of 24 colours.

The company has grown from that small Thoissey base, to one that produces almost 160 different pieces and more than 600,000 items each year, going to the four corners of the globe. Exports account for 50% of sales, so Bernard can certainly now say it is a global brand.  In Bernard’s opinion anyone can buy machinery and make a product, but the essential capital of a business is the people who make it. Fermob’s people - now numbering over 200 - have taken very positively to change, as the business has grown and evolved.

Bernard himself is from several generations of entrepreneurs his wider family have interests in food and wine including cheese, ham and salami, wine and hotels - yum! Above all Bernard likes to have fun, and that certainly shows through in Fermob’s joie de vivre.

#FermobWeekNZ - find out what else is planned for the first Fermob Week in NZ, join us in the showroom on Saturday for a day of Fermob festivities and don't forget orders for our January shipment close Saturday.