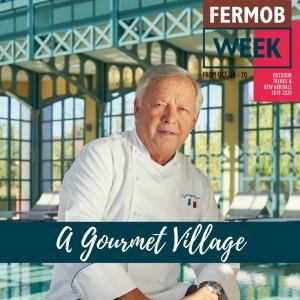 "I wanted my terrace, like my cooking to represent modern French art de vivre."

Georges says “I wanted my terrace, like my cooking to represent modern French art de vivre. Besides being close geographically, there are many other similarities between the history of Fermob and that of my cooking. First because in our respective businesses, we strive to defend a heritage, a culture, and art de vivre. Secondly, we’re both heirs of a craft which we are proud of and which we use every day to reinvent our trade. On the one hand, Bistro chairs and on the other Poulet de Bresse with confit of garlic. On the one hand, renowned designers, on the other talented young chefs. Our futures also seem promising.  And lastly I didn’t think that the terraces of my restaurants could so embody movement in this ever-changing modernity that I am so fond of”.

Georges was born in 1943, the great- grandson of the Blanc family of Bresse, just outside Burgundy.

Georges great-grandfather was a limonadier – lemonade seller and coal dealer, and it was the women of the family who ran a traditional café.

The women of the family excelled at hospitality, with Elisa Blanc earning her first Michelin Star in 1929 and then a second in 1932. Soon she is joined by Georges mother Paulette who carries on the traditions and fame of Auberges Blanc.

Georges himself had no great desire to be a chef, dreaming of being a pilot and travelling appealing more. Sadly for the airforce, but luckily for French cuisine, he turned out to be colourblind, so a flying career was off the menu!

“Like many young people, I wanted to travel and go on an adventure and do something different from what my parents were doing,” reminisces chef Blanc on his younger years. “Though I’m a fourth-generation chef, I didn’t want to enter the family restaurant business. I had always intended to be a pilot in the air force,” he shares.

In 1965 after doing his military service as a cook on navy aircraft carriers Georges began work at the family inn, succeeding his mother at age 25. He became the first male in four generations to take control of the Blanc family stoves!

In the early 70s Georges Blanc began to evolve the traditional restauranthe inherited, with a newer style of cuisine, lighter with less butter and cream. The effect is the transformation the hostel of his ancestors into a luxurious hostelry.

The crowning year for George comes in 1981 - Blanc obtains the prestigious third Michelin star and the title of Cook of the Year, by the famous gastronomic reference guide Gault-Millau .

But Georges Blanc was not done yet! In 1990 he bought the café-grocery-bakery of a local family to open L'Ancienne Auberge: a replica of his great-grandparents inn that began the story at the beginning of the last century. He also buys seventeen houses around his restaurant in the center of Vonnas and creates a "gourmet village" Parc Blanc, that he restores in Bressane half-timbered architecture with hotels, restaurant, inn, shops, spa, heliport, and parks.

Georges Blanc today is at the head of a thriving company of more than 200 employees and a turnover of about 22 million euros.

The Georges Blanc House is the oldest Michelin-starred establishment in the world. Its first star was acquired in 1929 and the second in 1931, which represents, in 2019, ninety years (with the exception of the period of the Second World War) in the famous Red Guide. This is now a family history par excellence of nearly 150 years!

#FermobWeekNZ - find out what else is planned for the first Fermob Week in NZ, join us in the showroom on Saturday for a day of Fermob festivities and don't forget orders for our January shipment close Saturday.